The car thermometer read 11oC on leaving home. On arrival at Gibside it had gone up a degree. Historically, the average high for February around here is 7oC; the low is 1oC. For a while now things haven’t been what they used to be, and today was seeing the build up to yet another unseasonal storm. Dennis would be a good name for a storm: Dennis the Menace. But this is Storm Dudley. The only Dudley I ever knew was rather a timid man and a bit boring but, it should be said, nice with it. Certainly not up to flattening a row of fifteen metre trees, though.

We were above Snipes Dene where the Gibside estate borders a farm field clearing the damage done by Storms A, B and M. Well-practiced in destruction, the job of we volunteers was to lop off the side branches of fallen trees so that Rangers Steve and Dan could get in and hack up the trunks with chain saws and make a lot of noise. Fallen trees are often left where they fall except when presenting a danger or blocking a track or pathway. These trees had toppled into the neighbour’s field, so needed shifting. 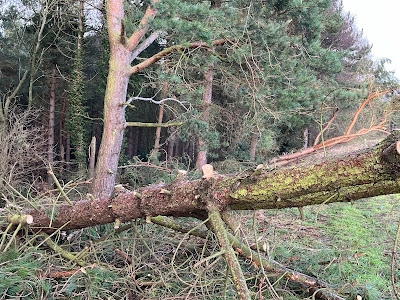 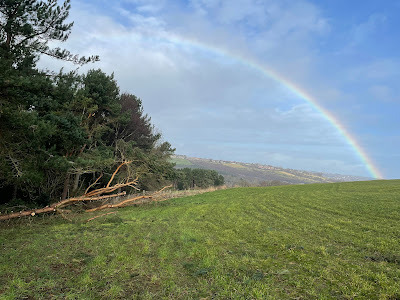 We piled branches and brash to create a dead hedge along the fence line. Much of the wire fence had long since deteriorated or disappeared, but a line of fence posts remained to guide us. With logs from the chopped up trunk of one tree we built a log pile and took the opportunity to reminisce about our early days in the conservation team.

There are deer tracks in a few places down through the sloping wood to the people track, but it’s otherwise not a good place for bio-diversity. The trees here are Corsican pine which, as the name suggests, are not native to the Derwent Valley. Single species, non-native woodland tends to be a bit sterile, but fringe woodland is invariably a good place for a little natural variety. The margin of the field falls sharply to the boundary, so is left uncultivated. Log piles and dead hedges are good for encouraging wildlife; woodland fringes are better. 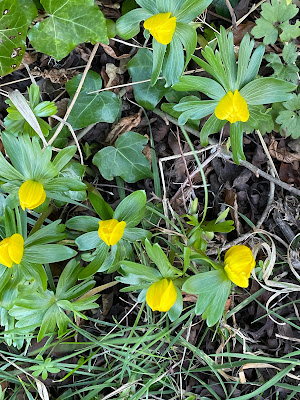 The “A-Team” was divided into 2 groups to begin today’s task - hedging. Group 1 headed off to the Walled Garden to begin digging up hawthorn bushes. These had been bought as whips 2 years ago, then the Covid-19 pandemic hit and they were planted out in the Walled Garden as volunteering came to a halt.

Meanwhile Group 2 headed off to the edge of a field way above the farm, the highest point on the Gibside Estate. The task here was to dig holes alongside the fence in readiness for the hawthorn bushes when they arrived.

By mid-morning there were enough bushes to begin the planting process. The bushes had grown well and had decent roots, and once planted they were protected with a plastic cover to protect them from animals and the elements.

By the end of the day, we had planted about half a field’s length of bushes in a double row. The remainder is to be planted at a later date.

Storm Malik hit the North East on Saturday 19th January causing considerable damage to many trees on the Gibside Estate and elsewhere. 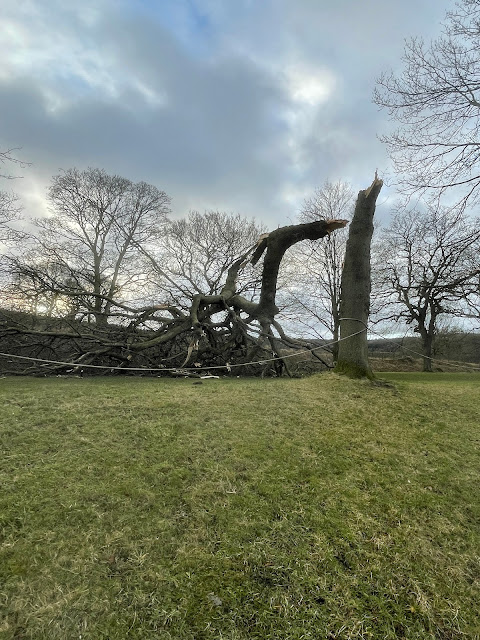 Our task was to remove branches from fallen pine trees just past the Column. A bit of déjà vu here as we had done a similar job after Storm Arwen, which hit the North east in November. 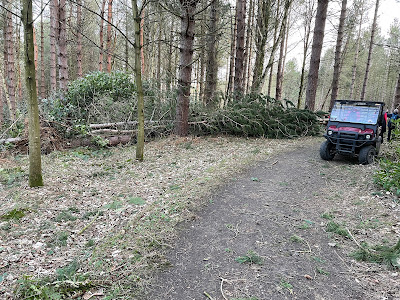 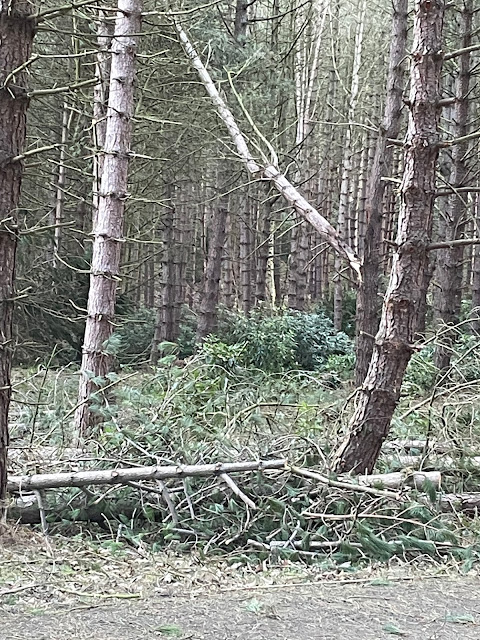 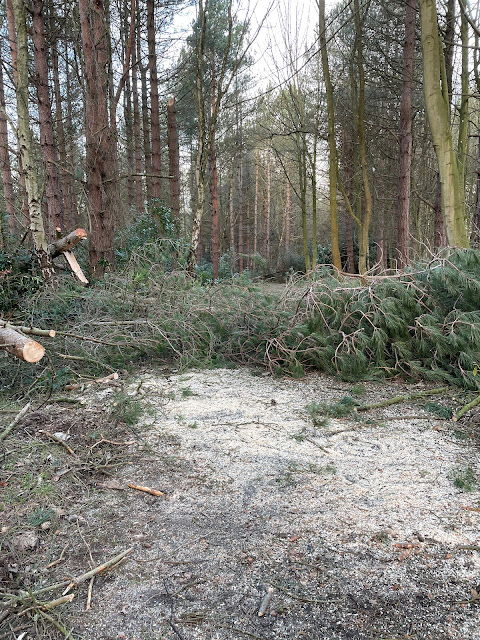 Side branches were removed and made into habitat piles thus enabling the rangers to cut up the trunks into logs with chainsaws.

Posted by Phil Coyne No comments:

The global Covid-19 pandemic put a temporary halt to our regular Wednesday volunteering sessions at Gibside, but now we're back.

Some of the projects the "A-Team" have been involved in are documented below. 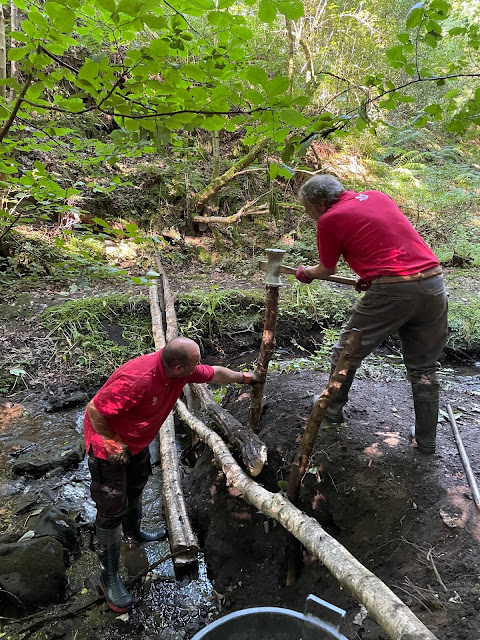 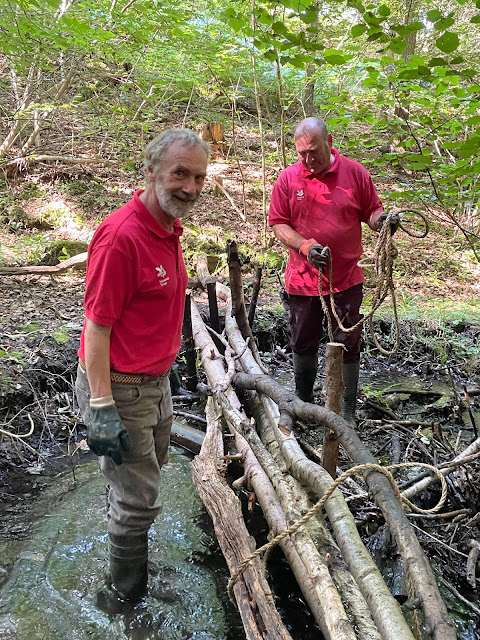 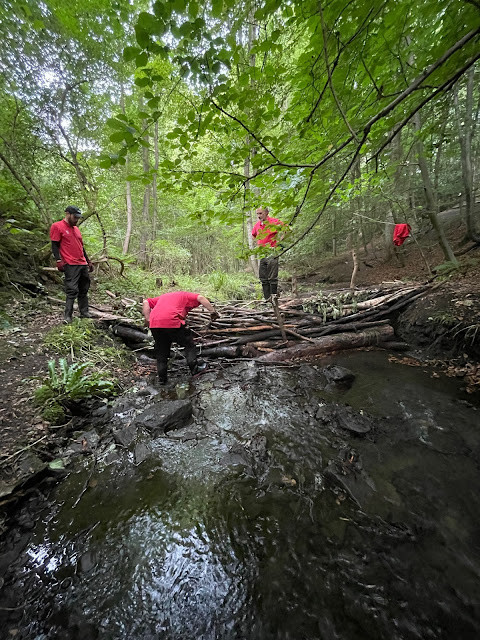 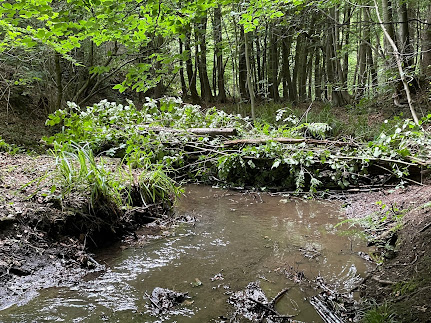 It was about ten years ago that much of Snipes Dene was clear felled. There was some replanting with native trees early on but mainly, for the next couple of years, it stood bare. Apart, that is, from the hundreds of thousands of Western Hemlock saplings that sprung up  everywhere. Spread out in a line across the hillside, the Wednesday team (and other people)  combed the valley, yanking out seedlings and more substantial plants as we went. We did that repeatedly and, if memory serves correctly, quite enjoyed it. Destruction is our thing you see: conservation through pulling things up and chopping things down.

After a slow start, natural regeneration had more than done its bit. Now, some years later, we are back there again sawing down trees and pulling up saplings in order to enlarge a clearing we had cut from the dense birch woodland that had moved in. Creating clearings encourages a wider variety of habitats and, in turn, a wider variety of flora and fauna.

After bark-ringing of a tree, the tree will gradually die to create a standing dead wood which will provide valuable habitat for various insects and nesting birds.
Creating a glade in Snipes Dene
Part of Snipes Dene has become overgrown with silver birch. A glade has been created by felling some of the birch trees, this provides an open area and will encourage different flora to flourish. 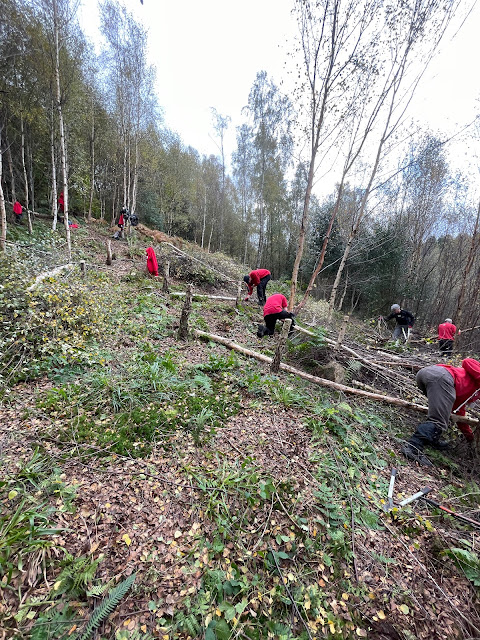 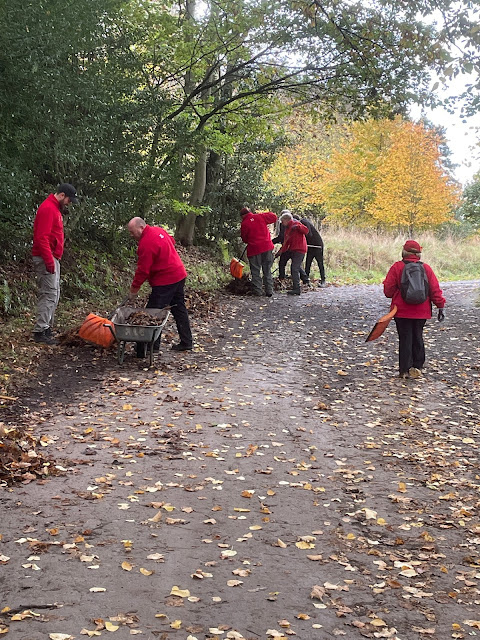 More tree felling - creating a wildlife corridor
Again a visit to Snipes Dene felling silver birch in a line down into the dene. This will create a corridor for wildlife but also be an aid to removing larger trees (should this ever be necessary) back up the sides of the dene where they can be dragged up by horse.
To be continued ...
Steve Wootten & Phil Coyne
Posted by Phil Coyne No comments:

A busman’s holiday in pictures


Over recent months volunteer work has been suspended and is only now getting going again, but remains very limited. Unable to work, four of us have been meeting up on Wednesday mornings for a Gibside wander and opportunity to reminisce. That largely dwells on things we’ve destroyed –rhododendron, western hemlock and Himalayan balsam – and some more positive activities, such as planting hundreds of trees, nurturing heather and encouraging grass snakes to settle down and have a family. And we’ve had time to take a closer look at Gibside’s wildlife. Here are some of our photographs: 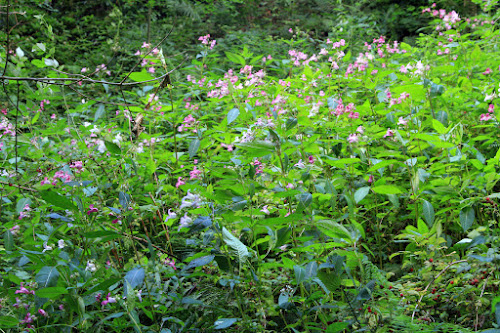