Quite childish and not very amusing

Toiling in the Ha-ha has its moments, but standing in mud and water shovelling out load after load of sodden leaves is certainly not funny. As a distraction, we did give some time to pondering the origin of the word which, if you care to look it up, is strangely disappointing. The other strange thing about this Gibside Avenue Ha-ha is that it serves little amusing purpose; it’s a bit of an oddity – offering, as it does for much of its length, only an uninterrupted view of the adjacent grassy bank when viewed from the Hall. It serves the Chapel better, but a wall might have done. The livestock are kept at bay, of course, but you might otherwise wonder why it’s there. Well, clearly, it gives a distinct edge to the Avenue, but it is, perhaps, just as much a product of changing fashion in landscape design. 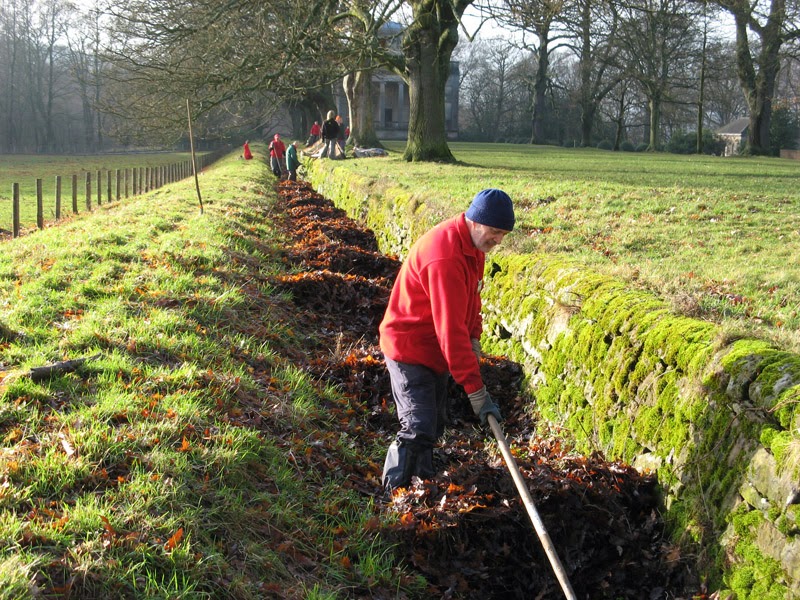 What the Ha-ha most certainly does do is gather vast quantities of autumn leaves, creating a drainage problem for its ditch, and a great deal of hard work for the Wednesday Conservation Volunteers. We seem to have done a lot of leaf clearing in the wet of recent weeks. But these last two weeks have found us doing more satisfying conservation work, looking after nature.


The building of the aerial walkway from the new car park to walled-garden and café area laid blight to the ground beneath. With some difficulty, digging down through builders’ rubble and soil-stabilizing netting, the team worked with Head Gardener Keith to plant an assortment of shrubs and trees including holly, yew, hazel and rose. Much of the timber that had been felled to make way for the walkway had already been used to build log piles back in the autumn. Log piles encourage invertebrates, and invertebrates attract anything that likes to eat them.
Whist some of the team were working under the walkway, others supervised visitors in cutting back the rhododendron in the woods by the Hollow Walk which constantly threatens to blanket the woodland floor and smother native plant life. In all one hundred and twenty visitors joined in – sixty-nine children and fifty-one bigger people; that would have been half-term week. This week the not-so-young Conservation Volunteers took great pleasure in burning the cuttings on three bonfires in the woods; quite childish really. 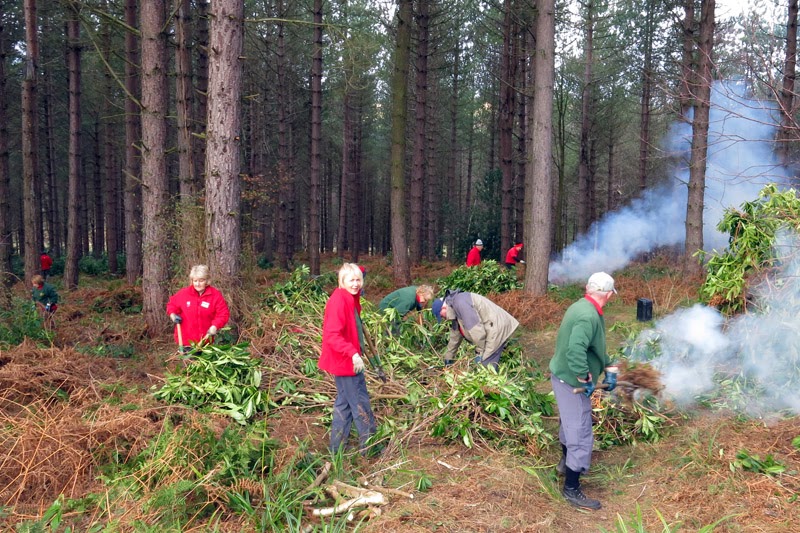 As well as being rampant, rhododendron can be quite substantial, so we used the larger bits to build another log pile in the woods. Across the track we removed rhododendron the size of trees to uncover an ageing sweet chestnut: a visible reward for our efforts.